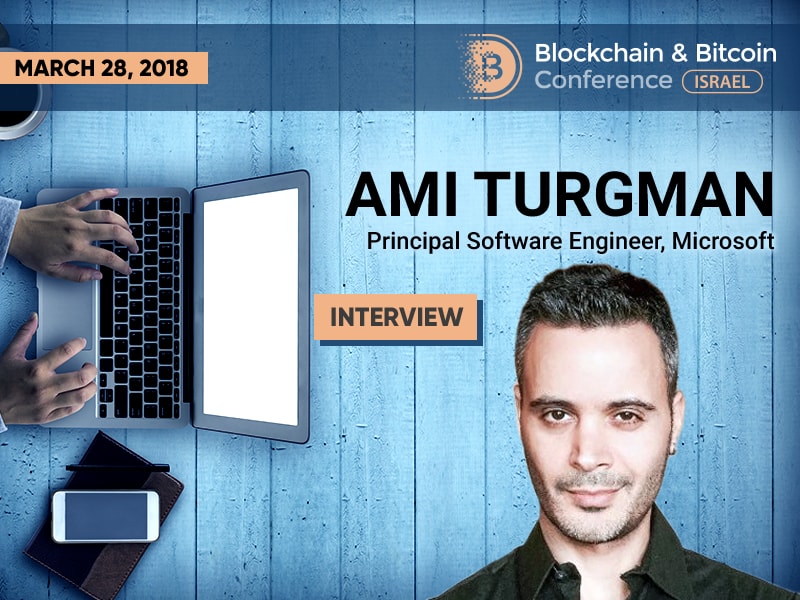 Ami Turgman, Microsoft: About energy consumption by mining as well as PoW and PoS issues

It’s problematic to say which protocol – Proof of Stake or Proof of Work – is more promising due to the whole bunch of unresolved issues, notes Ami Turgman, the speaker of oncoming Blockchain & Bitcoin Conference Israel, Principal Software Engineer and Evangelist at Microsoft. We talked to him in the run-up to the event.

Join the Conference to get better acquainted with the speaker’s view of underlying protocol that drives the blockchain network.

BCI: Hello, Ami! Which protocol do you believe to be more promising: Proof of Work or Proof of Stake?

A. T.: It’s a bit problematic to say since each of the protocols has it’s own advantages and disadvantages. I think that PoW has already proved itself as a solid consensus algorithm that’s been securely used for years in the Bitcoin network, for example. The problem is that it’s not sustainable as far as energy consumption is concerned, and it’s not getting any better. As we manufacture more advanced and faster computation power, we increase the difficulty of the protocol to keep the rate of new blocks generation constant, which in turn requires the use of more energy, even though the processors energy consumption is reduced. In addition, it’s also not scalable, as we see more and more traffic in these networks.

The problem with PoS is that, as I see it, there are a lot of open questions that are raised by the community with no clear answers, or at least the answers we get are vague. Questions like –

Until we get clear answers to these questions, it will be difficult to answer which protocol is more promising. There’s no doubt about the necessity of reducing the energy consumption used in PoW and increasing transactions throughput, but as things look now, I think it’s a bit early to say that PoS provides both a sustainable, and a secured mechanism for reaching consensus, as PoW does.

BCI: In one of the interviews of 2017, Vitalik Buterin shared opinion that mining would be beneficial another year or two and afterwards there would be no sense in mining. How would you comment on the statement?

A. T.: I’m not sure what the context was, but I can only guess that Vitalik is referring to the energy consumption that only gets higher as the difficulty of the PoW puzzle gets more and more difficult. Miners should always make sure that in the end, they are on a positive balance between the cost they spend on energy and the income they get out of the rewards and transactions fees they get for the blocks they succeed in mining. Once they get to a situation when they need to invest more money in energy than what they are able to get from mining, it will become none profitable and then there will be no incentive for miners to mine.

BCI: The Bitcoin network is arranged in a way to reach the maximum possible number of coins – 21 million. What can developers do to make the number of coins change to unlimited? If that is impossible, will you explain why?

A. T.: Nothing is impossible since in the end we are talking about the code that can be changed. The Bitcoin community changes the protocol every now and then when they want to add more features or change how things work, for example, to put more transactions in a single block. When that happens, there are always those who are in favor of the change and those who are not happy with it. If there is a critical mass, we will see a hard fork, which in turn makes a new token born. This was what happened when Bitcoin classic and Bitcoin gold tokens were created. So, if there is enough developers in the Bitcoin community that want to change the economy model of the Bitcoin, they will need to make the necessary changes to the protocol and hope that the community will adopt the new changes by applying their nodes with the updated protocol.

BCI: In your opinion, what will happen to Bitcoin blockchain when all coins are mined?

BCI: Is Ethereum planning to shift from PoW to PoS? How will it affect Ethereum blockchain?

A. T.: This goes back to the first question. I think that this is too early to say, as there are a lot of open issues and questions raised by the community with no clear answers yet. I just hope that by the time this happens, the main concerns around security and sustainability will be answered by the protocol.

BCI: Please, tell us more what you will be speaking about in your presentation at Blockchain & Bitcoin Conference Israel.

A. T.: I will speak about the protocol that is used today in the Bitcoin and Ethereum networks. I will explain what PoW is, how the nodes are synchronizing the data in a distributed network in such a way that is secured and reflects one true amongst all nodes. I will speak about how the double spending problem is solved, what happens when multiple miners succeed in mining a block at the same time, and much more.