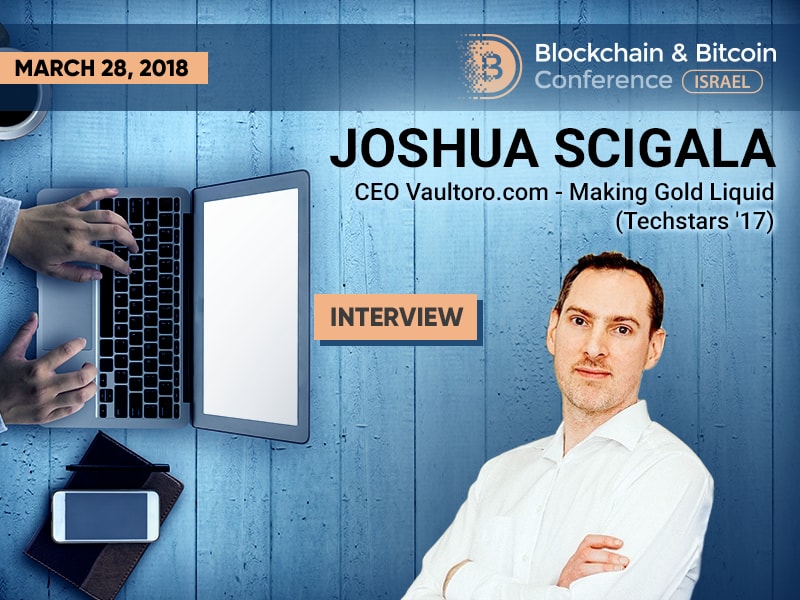 Blockchain payments can be easily made using e-wallets, effectively decentralizing a UBI scheme, therefore we can solve the taxation problem, CEO of Vaultoro.com Joshua Scigala says. What else is possible by using cryptocurrency and how blockchain technologies could change labor market?

The expert answered in an interview with Blockchain & Bitcoin Conference Israel, as well as told us about advantages of buying and selling gold with bitcoins.

BCI: You predict that soon, half of the workplaces on the planet will be replaced with artificial intelligence. How do you think this will change the world economy and the social structure of society?

J. S.: The current social security system is more like a Ponzi scheme, you need way more people working and paying taxes into the system to pay for the unfortunate few that can’t work, how would this work when the unfortunate few become the unfortunate majority? This is not a sustainable social safety net when more and more people become jobless. Many people talk about a universal basic income (UBI) but this does not work due to large employers leaving zones that implement such a scheme as a result of extraordinary large taxes compared to places that don’t have a centralized UBI.

BCI: What part in such radical changes in the labor market will blockchain technologies and cryptocurrency play?

J. S.: By having a mathematically predetermined mining regime that no one can corrupt we could see blockchains paying into everyone's wallets every week effectively decentralizing a UBI scheme.

This will solve the taxation problem by issuing newly mined currency instead of taxation.

BCI: What are the advantages of buying or selling gold for bitcoins? Why is it better than fiat money?

J. S.: When you put fiat in a bank, you don’t own it anymore, the bank does. They just promise to pay you back with interest. If an exchange goes bust, as many startups do then liquidators can come in and take anything that is left. If the bank goes bust, as we saw in Cyprus, then the exchange loses everything but 100K insurance if they are in the EU.

Gold is a fully allocated asset that is secured off Vaultoro.com’s books. If anything was to happen to us as a startup then clients’ gold is their property secured in their name and nothing to do with Vaultoro so liquidators can’t touch it. And all gold is secured in one of Europe’s largest high security vaulting facilities. Located in Switzerland, all gold is fully insured and audited by one of the largest auditing firms in the world. It’s all about derisking and fiat is too risky.

Depending on the clients’ country there are also huge tax savings by going into gold instead of fiat.

BCI: Is it possible to build some other system of labor compensation on the basis of blockchain, besides the usual "work for wages"?

J. S.: Humans have this want in them to collect things and attach value to collectables.

Numbers in a leger are also collectable. Blockchains have demonstrated that they can produce a token out of nowhere and people will assign a certain value to it depending on many factors. This means that a UBI can be produced without the human working for that token.

A problem I see is how to stop people Sybil attacking such a network by fooling the system into thinking one person is many and paying out a lot more to that person. How does inflation work? Could the inflation rate be determined by an AI whose objective is to have the biggest middle class possible and analyzing millions of data points in the economy to determine output? Who knows but it's fun to think about.

BCI: Tell us a little bit about the information you are going to share at Blockchain & Bitcoin Conference Israel.

J. S.: I’m going to elaborate a bit more on the concepts above but will also be doing a session where I outline what we do at Vaultoro and why buying and selling gold with bitcoin is so advantageous over fiat.